out of Hiber Nation

I have visited the Portland Zoo twice since my last blog post. Both times I liked watching the bears and seals the most. The most recent time, the bears were all sleeping. I don’t think they hibernate at the zoo, but that was my first thought while gazing on their big haunches rising and falling with each huge sleepy breath.

We haven’t really been hibernating all this time. We’ve actually been very busy bears, but I like the image of us awakening from a slumber filled with dreams of tomato abundance, excessive squash (which we’re still eating), a mighty Filbert harvest, and one c-c-c-cold winter.

Spring is upon us again and it has brought with it our inaugural-second artist in residence! Meet Zoe Minikes (5 word bio: Zoe draws daily and obsessively). She’s cookin’ something good here on the farm, but I’ll wait to unveil everything she’s been working on. One of the things I CAN share with you is our spanking awesome residency website designed by Zoe herself. Scroll down fast and then slow. We’re also so proud to be hosting Joey Grihalva (29 word bio:  Joey Grihalva is a podcast host (“The Milwaukee Auer”) and journalist (of the radical first person persuasion) working on a lighthearted book about the philosophy and necessity of sustainability.Big things happening and dreams coming true!

I’ll be posting more about Zoe and Joey’s residencies, so don’t change that dial.

Zoe in her “studio” (our living room).

Joey in his “researching chair.”

boots and gloves and hats and stuff.

Gabriel planted four rows of tulips last winter and they are beautiful.

I told Zoe she could trim the Boxwoods out in front of the house and then one day I came home and found this little guy waiting for me.

These are potato cages. The idea is that as my potato plants grow I can keep dumping soil on them until the plant’s foliage reaches the top of the cage. It will continue to create tubers as it gets taller. At the end of summer I can harvest the spuds by simply opening up the cages at their seams, let the soil spill out and grab the delicious food! Hopefully it works. 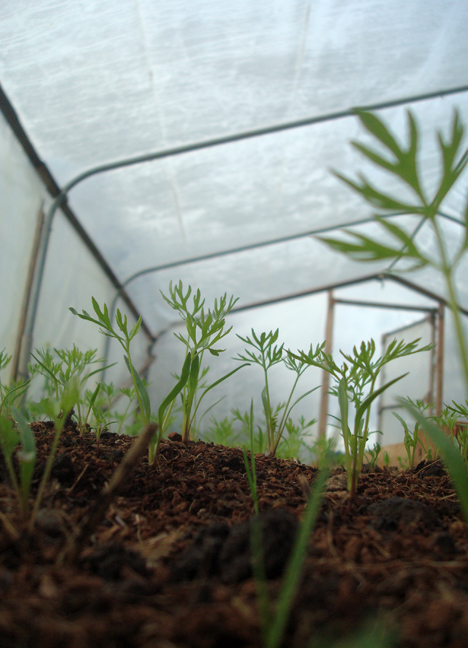 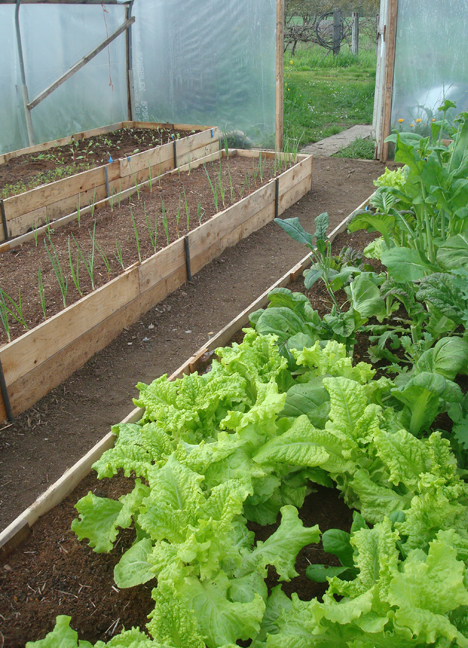 We started tracking light patterns in our new greenhouse last month. That was when the sun was actually shining. 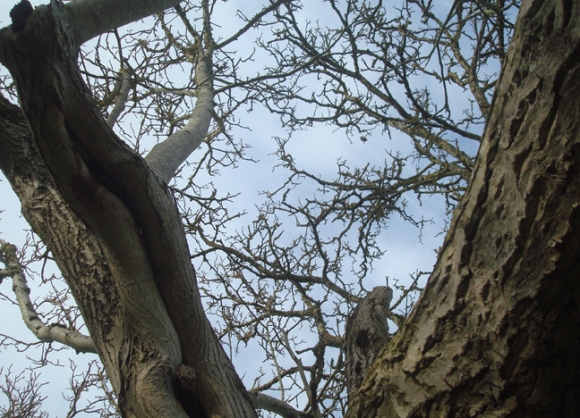 We’re proud to be growing seed crops for Adaptive Seeds again this year. What you see here: rutabaga, leeks, and some onion in the back. 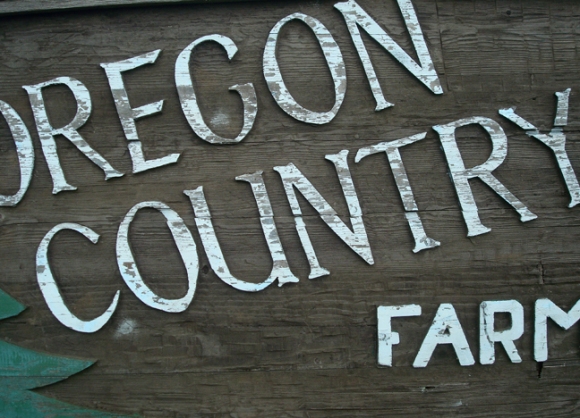 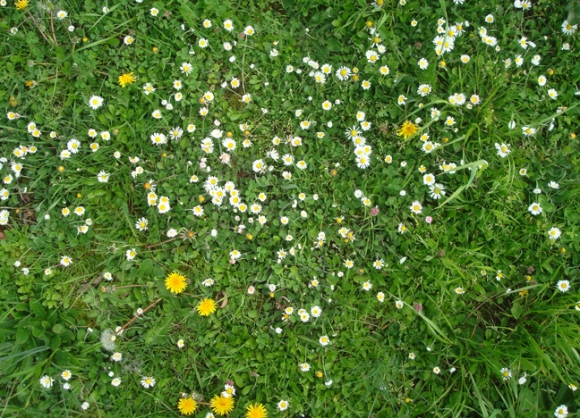 For the past two weeks, Gabriel and I have been surrounded by serious abundance. Hoards of tomatoes, armies of squash, herds of green beans, squadrons of pears, battalions of apples and, most especially, flocks of friends. It’s hard to believe the season is almost over. We’ve been over the stove pickling, processing and drying. We’ve been out in the fields harvesting and putting our beds to sleep with the sun dipping low earlier and earlier each night. This is what happens at this time of year but what makes this time particularly magical for us is all of our friends and family who have been getting dirty, sticky and silly with us. Deja, Josh, Zach, Mara, David, Joe, Christopher, Shiva and Joshua – you have been our abundance!

Here’s a reflection from Joshua – a friend of mine from elementary school who just left to head back to the Bay Area:

It’s my last day on the farm
Woke up with strange dreams
I lay awake with visions of the past year swirling in my head
I’m not home,
it’s better that way,
i’m on the farm for one last day
Hip-Hop-Hurray

There’re few people I’ve known for as many years as friend Serah Mead
She works the land of Oregon Country Farm with her Milwaukee Man,
known as Gabe or Friendly Ears

Good music was to be had the moment we came in a week ago
Magnificent P dropped me and Marz off and even though he was headed to
Barter Fair,
there was a little part of him that wanted to stay

It’s one thing to be plopped down on a 21 acre field o’ nuts, but it’s
a completely different story
when the people running the hoes are quality, choice individuals

Cousin Deja was in town from Chicago
“all my co-workers are jealous of me right now” she would say,
she was staying for 3 weeks

Its an interesting phenomenon, young folks wanting to go pick tomatoes
or crush apples for the cider press as good wholesome ways to work
outdoors and reconnect to where
our food comes from, instead of being locked up in the city, at least
for the whole year

The Farm is blessed in more ways than one, owned by Rod and Sara Feilder patrons
of Brownsville, Oregon

One of my favorite moments of the week was around the fire spinning ‘yarns’
with Rod and extended company of the band Magpie, three young gents
wielding stringed instruments that could be heard earlier in the year
when they played a show in the hazelnut orchard

Sacred stories under the stars,
this is what country living is about, evening times without a TV are
just some young folks,
one old man, surrounded by fields of fruits and nuts
glorious

before I left for Oregon I stopped by my old support group in San Francisco,
which I helped facilitate for 8 years in my rise becoming a
mental health educator and performing artist

I asked a young guy point blank who seemed to be looking for
direction: “if you could do anything with your life, and money
wasn’t an issue what would it be?”

He leaned back in his chair, “be outdoors, work with my hands and live
off the fat of the land”
“sounds like a ticket to go up north and try out some farming ” I said,
“yeah” he said, “what more do you need?”

Ed Fella is showing me new moods and styles and intriguing ways of communicating visually. 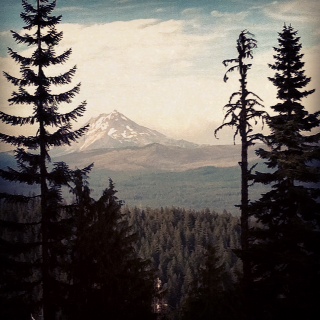 Dear soon to be hand-made/ man-made deities, thank you for Cascade hikes and Ed fella and Geoff McFetridge and Voodou. Thank you for making rosemary so oddly intensive to illustrate and thank you thank you for acrylics and allowing me to use them like a cognizant young artist instead of a drooling, bumbling excuse for a Neanderthal…and grant me patience thou deities of my subconcious!

p.s. there is a magpie record cover and a far out mantle piece portrait a’comin’ so stay tuned!

After nearly 8 months of living in such a beautiful adventure-land, we finally went for a hike.

And they surveyed their land and decided it was good. 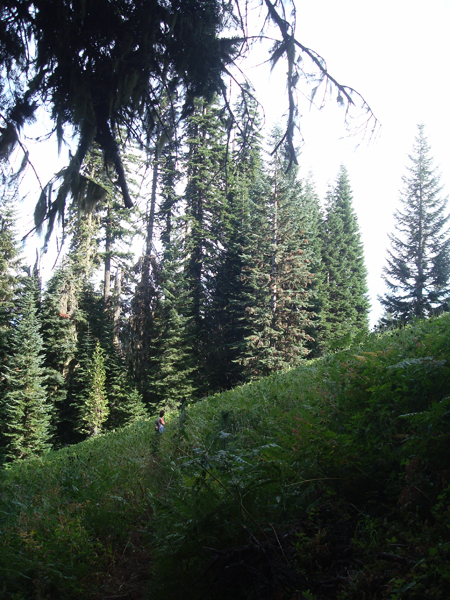 Jon in the slanted meadow. 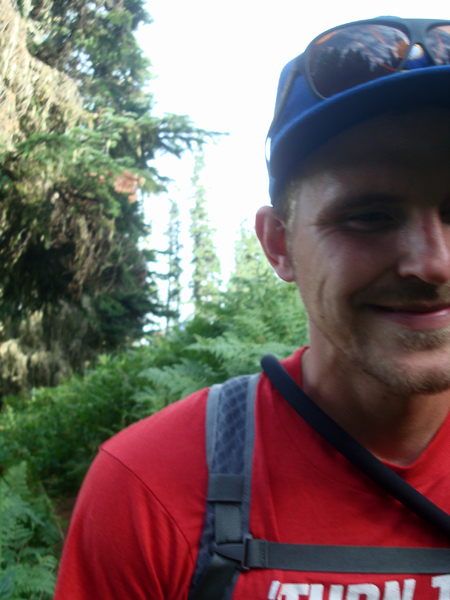 Holy Basil Pesto, Batmans – it’s been a long time since we’ve posted anything. Since there is so much to talk about, I’ll give you both the short version and the long version.

Short version: Life is great and we’re happy and the farm is stupendous.

Long version: We’ve been having a great cherry year all of a sudden. Pie cherries galore. Gabriel has been making these wonderful jams and preserves, infusing them with a home-made lavender steep. Our tomato plants in the greenhouse have been slowly but surely pumping out delicious little cherry tomatoes and the random Silvery Fir or Early Girl. The Suyo cucumbers in the green house are comically large and bumpy but make a delicious salad and can feed 5 people.

Our basil crop is, I think, the biggest and most pleasant surprise. We planted maybe 30 plants outside and another 20 in pots without really thinking what abundance that would bring. So far we’ve had two really wonderful harvests with ever more expected. I’ve been experimenting with pesto – mostly basil walnut – and have had huge success. In two weeks we hope to have several 1/2 pint jars to sell at Saturday market in Brownsville.

Speaking of Saturday market, what a great thing. We’ve gotten such wonderful support from the community and the Calapooia Food Alliance. While it can be slow some days, Gabriel and I find the market to be just the right size for our operation. The more we bring, the more we sell, the happier everyone is. So far people are loving our salad mix, kale and beets with radishes, berries and rhubarb as close seconds.

The orchards are looking good. Aside from a gopher problem in the Filberts and a little fruit crowding in the apples, everything is about ready to pop come the fall. We’re eager to prepare the filbert orchard for harvest and all of the machinery for cider making.

Gabriel and I are still tweaking our schedules to find the perfect balance between outside work and farm work. We’ve been able to add a healthy dose of play into our lives (swimming hole rope swinging, Oregon Country Fairing, Oregon Coasting, etc,) but we still tend to find ourselves in a tiny bit of a scramble during the week. Since I’m still new to this I’m still trying to understand if this is the life of a farmer or if this is the life of a novice-unorganized-over-eager farmer. Come Autumn, we’ll know for sure.

Enough with the letters, here are some pictures.

This was a gift from Gabriel. It’s called Mother of Millions. Those little alien things on the edge of the leaf are the new babies. It just takes a strong wind or a firm jiggle and they will detach, fall to the ground, and root. 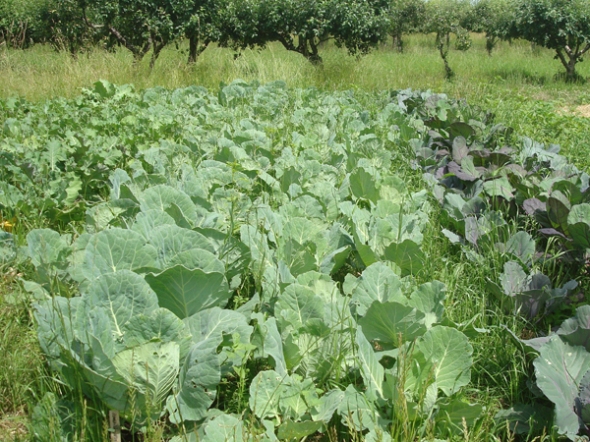 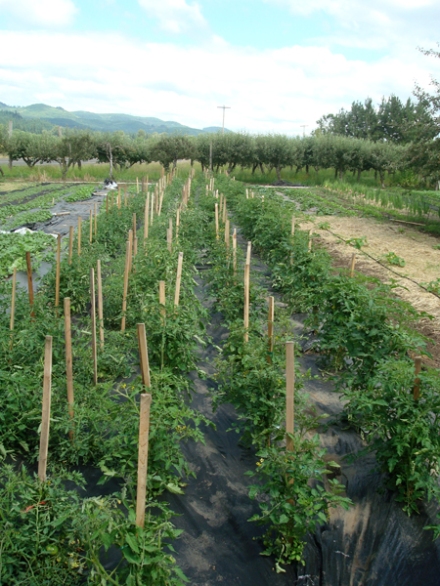 About 150 of our 200 tomato plants. Once these plants start bearing fruit faster than we can eat, our road-side stand will open. In the mean time, tomato recipes welcome. 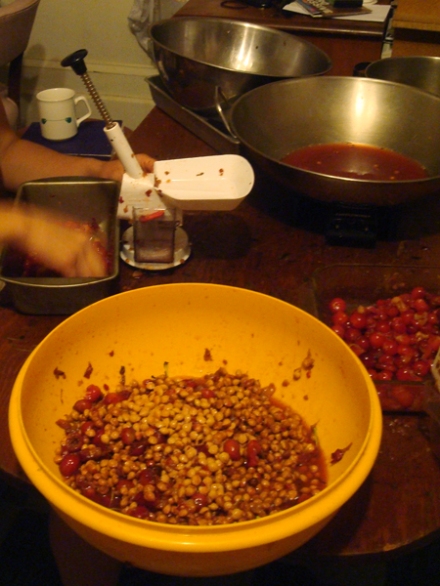 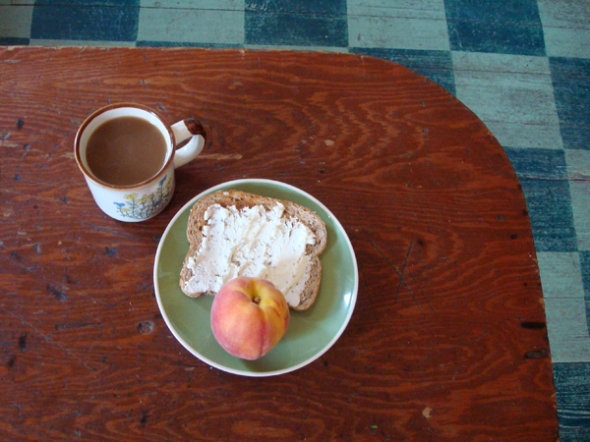 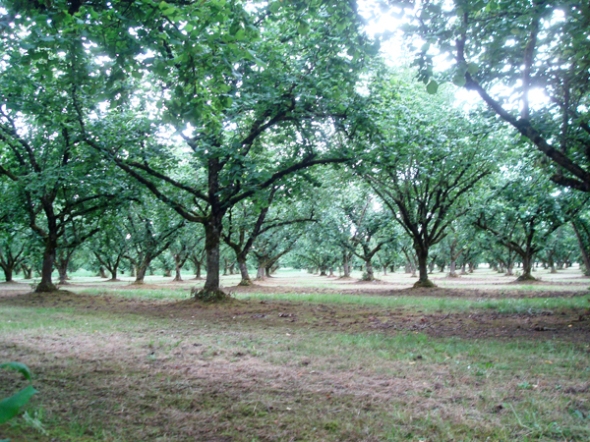 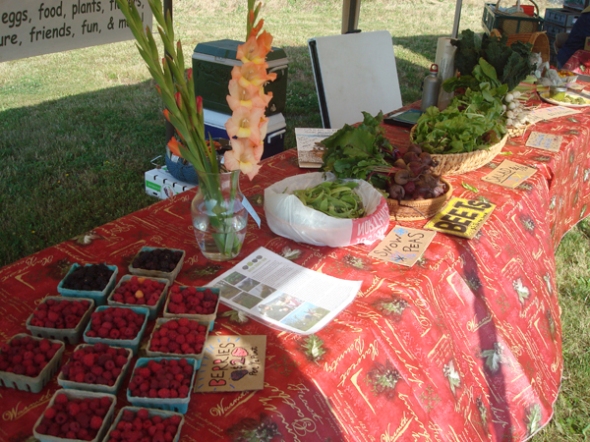 a lot happens in a month

We’ve been busy! Between dressing up like 1800’s saloon workers, planting over 200 cabbage plants and 150 or so tomato plants, mowing mile high grass and tons of other thing, we’ve been skipping out on the ole blog.

Well here are some photos to catch you up a little bit. More to come soon! 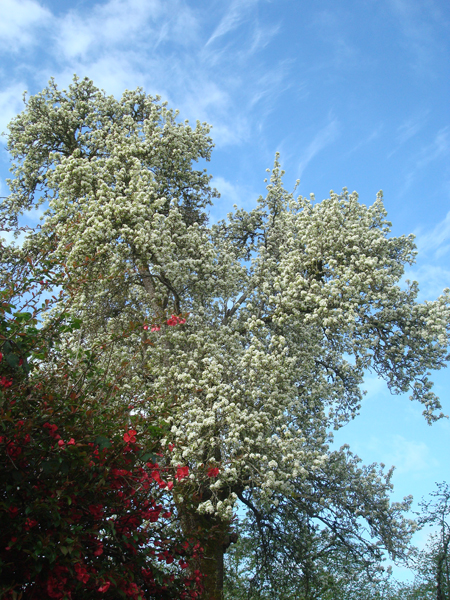 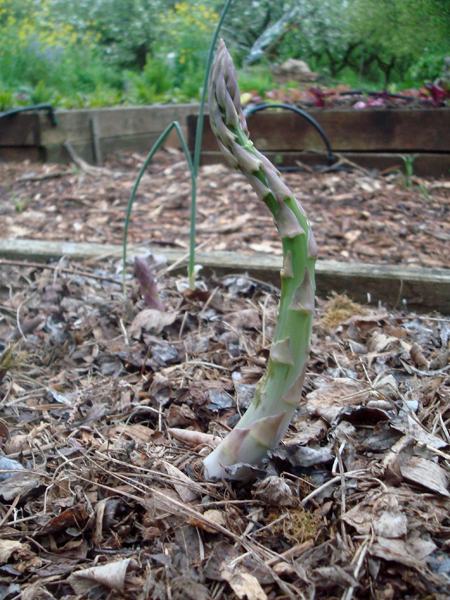 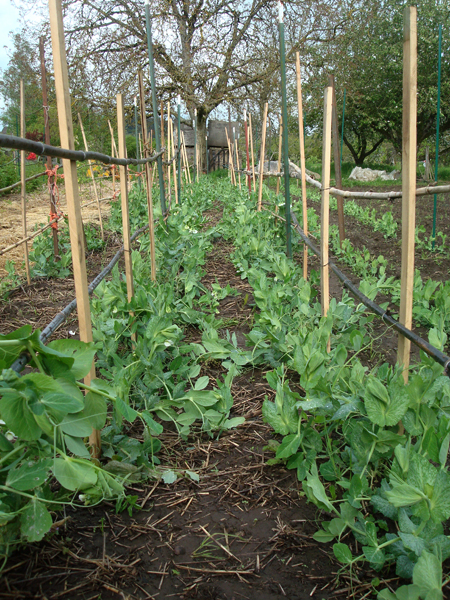 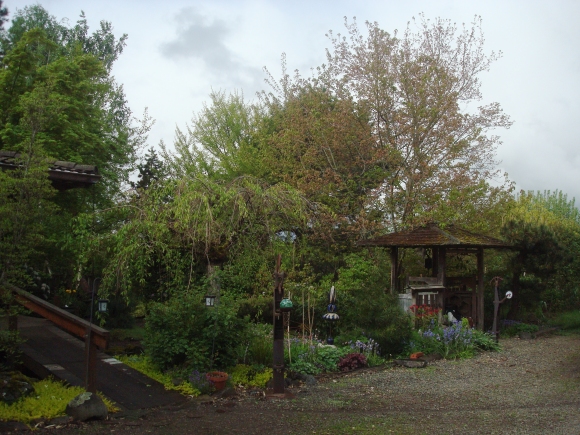 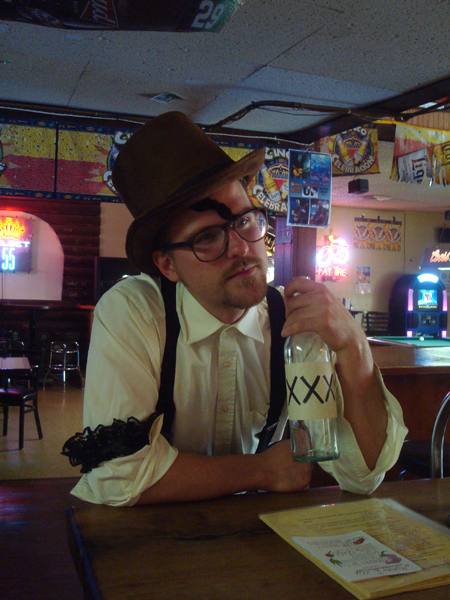 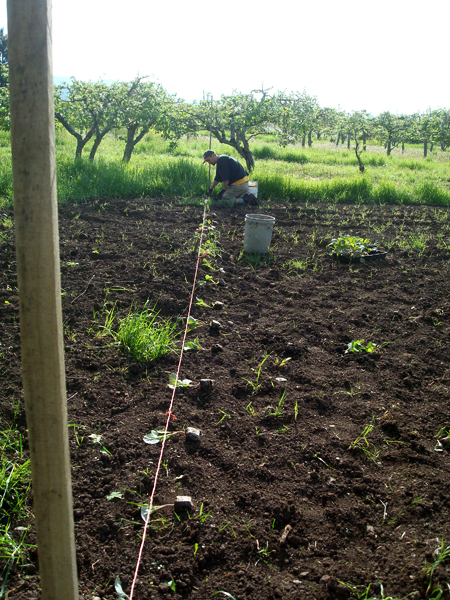 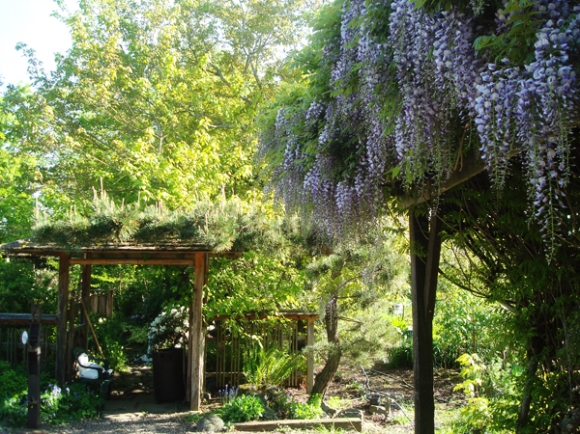 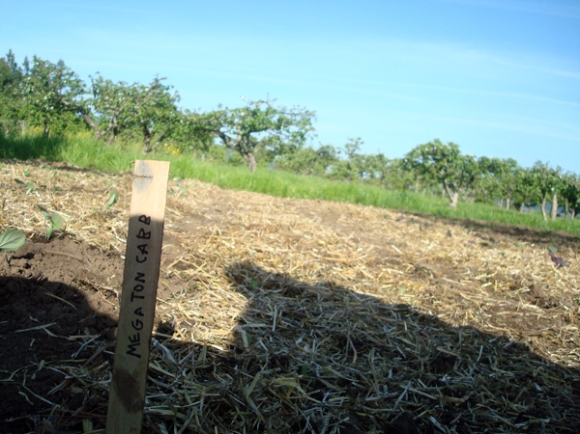 more words about succulents and food

Yesterday, Gabriel and I transplanted a whole bunch of little starts – tomatoes, pepper, cabbages (coming out of our ears), broccoli & endive. It’s always nice working in the green house and I tend to get a little distracted in the warmth, especially when I walk by those little succulents. I started wandering over near the little plants and peering behind weed infested pots to find more and more types of succulents that I had never noticed before. I began pulling clover and ivy volunteers out of the hidden pots and become so distracted that Gabriel had to remind me of our mission: transplanting food plants/thinking about farmers’ markets/business. So I made a secret deal with myself that I’d be back the next day.

6:35pm, Pacific Standard Time, due West from the mud room 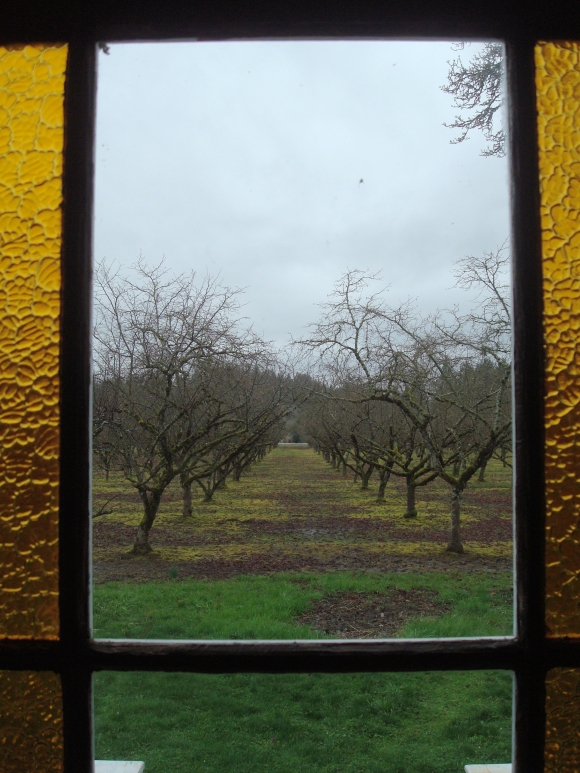 a look at the orchard

This was in early January. We spent the whole month pruning the younger 5 acre orchard, taking about 20% off each tree, eliminating crossing branches, lightening the load on over-weighted limbs and generally cleaning up the ‘crown.’ In three years we’ll come back through this orchard and do the same. We have a total of 15 acres of hazelnuts and each year we’ll do a major prune to one 5 acre spread creating a rotating cycle of 1/3 of the orchard getting major attention ever three years. The cuttings were collected in piles between the rows and Gabriel went through with an enormous fork attached to the Ole Massey Ferguson and scooped up the piles. When my parents visited from California, we pruned in the sunlit morning and were having a snowball fight by noon.

This is a collection of photos, lists, drawings, ideas and general day to day adventures of us folks on at Oregon Country Farm. From dragon sculptures to Snap Peas you'll find it all here.